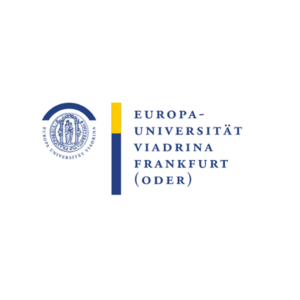 The European University Viadrina (EUV) is a university of 6000 students located on the German side of the German-Polish border, with a special focus on the social sciences and humanities. It has been consistently ranked by the German Academic Exchange Service (DAAD) as one of the top 5 most international universities in Germany. Research is carried
out within the three faculties :

Since the beginning of the 1990s EUV has been involved in intense cooperation with the Adam-Mickiewicz-University Poznań in Poland that has resulted in the establishment of a joint research and education institution – The Collegium Polonicum – which is now also home to the European New School of Digital Studies, a new interdisciplinary unit for research and teaching on the digital transformation of European societies.

The EUV can also count on an active and well functioning language centre that provides a wide range of language courses for students, teachers and staff : in English, French, Italian, Polish, Russian, Spanish, Turkish and Ukranian and German for foreign students.

Since its re-founding after German Reunification, EUV has been dedicated to fostering European integration by building bridges and developing dialogue, with the primary focus on cooperation with the neighbouring country of Poland. In line with the concept of the Weimar triangle, cooperation with French universities is of special strategic importance. Over the years, EUV has extended its mission to other eastern and western European countries, including new regions in conflict at the Eurasian border as well as in the Mediterranean area.

Internationalisation and inclusion have been at the core of the university strategy since the beginning. Now that EUV has had the experience of co-creating a cross-border research and educational institution, it is eager to take additional steps to increase its range of core partners, in the eastern as well as in the western parts of Europe. Such institutionalised relationships will be an asset for both internationalisation in education and the development of future research networks.

EUV will co-lead the IO2 on gamification and education games. It will bring in its scientific knowledge on the effects of serious games on learning and its experience with games design. This knowledge and experience will be combined with the learning experience in language teaching and mediation brought in by the lecturers of the and of the self-learning centre at the Viadrina Language Centre. Moreover, EUV will bring in the experience of working with 3D avatar-based learning environments in which students, teachers, tutors,members of the university administration interact as avatars in common virtual spaces. Participants are free to create their own avatar as they wish and therefore a potentially different image of themselves, to test and reflect gender and diversity driven consolidated roles and to potentially overcome them. Besides offering an environment that fits the knowledge and media experience of the young generation of students, the avatar-based 3D environment has a strong potential of fostering inclusion at universities.

EUV has intensive expertise in gamification and the use of 3D learning/teaching space, used more extensively by its Language Center, since the Covid-19 pandemic in addition to video conference systems. It will be responsible for: 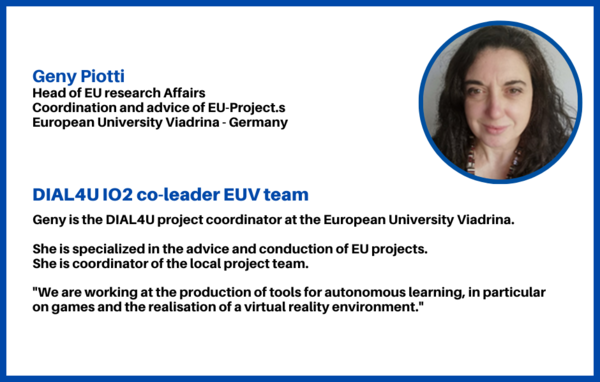 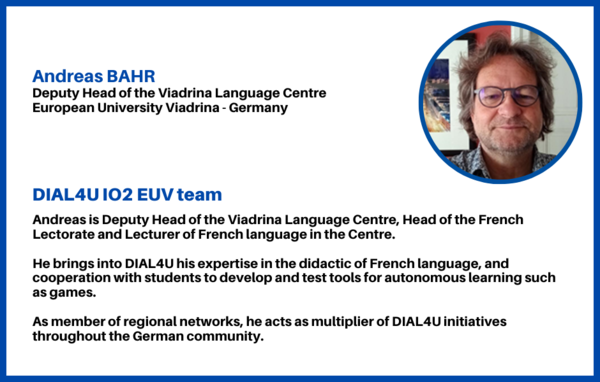 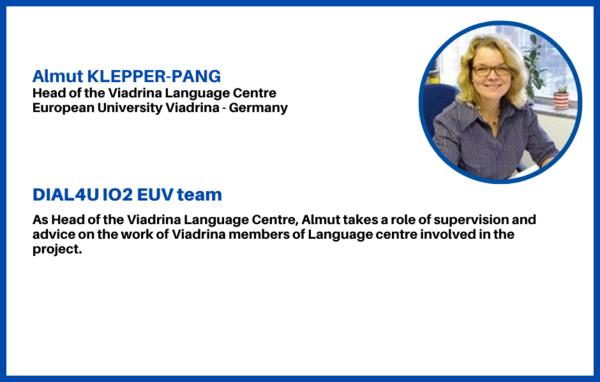